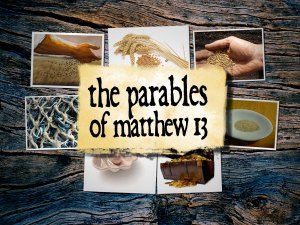 Are you in surrendered devotion to Christ or to an end times theorem?

The Parables of the Mustard Seed and Leaven are explaining what the opposition is like to the Kingdom of God in the form of a metaphor. They use basic language and objects from people’s everyday life. Why, so they can easily grasp and relate to what is being taught. Christ is telling them and us, is your faith real? Is your faith authentic, if not you are a fake a counterfeit that will be pulled up and thrown out.

Yikes, this means Christianity is not a game or a club, it is serious and it is eternal!

Yet, to be real in faith is to have mastery and majesty at our call, we may not be able to literally say to a mountain to jump into the sea, but in eternal manners and relationships, substances that are really important, we can do amazing things! Having power over material things makes a good show, but is of no use to what is really important, our focus needs to be on Christ as our Gardner and not the weeds of the world!

God’s Word has life and power, we must have the willingness to see His grace and apply it to our lives by faith, so we can grow and be used by Him for His glory!

When He is the Gardener our life has purpose and meaning, He may plant you where you do not see the soil; nevertheless, it is there, make sure your roots are strong enough to break through the harshness of life to His nutrients that are available and abound. God calls us to be real and pull up the fakes!

“A man who,” this is a picture of the “Everyman,” the person on the street who is faithfully serving the Lord. Even though only the wealthy owned the land or it was occupied by the Romans most of the people were the workers and their families. These people were peasants and some were slaves. They were like the blue collar worker who owes to the company store, literally, except much poorer. They had little wages enough to survive on but and not enough to break free and go on their own.

In contrast, slaves then were indentured and could be bought and sold. A slave in Greek times was totally at the master’s disposal and even expendable. Jesus message about tolls and obedience would hit home with them since they knew what it means to be in total surrendered devotion. This is the theme for us in Christ that the disciple of the Lord has a will that has been sacrificed to God’s will and thus is totally at the disposal of our Lord (Gal. 1:15; 2:20)!  A peasant could leave; however, they had nowhere to go usually. Both of these groups would know full well what Jesus was teaching.

Jesus sets up His point, “like,” that this is an allegory, as it does not mean the Kingdom of God is a man, “refers to analogy. Even the word field, refers is symbolic perhaps meaning the Church and or the mission field of the world; however the syntax and cultural considerations refer to everything in the universe.

“Wheat “was the primary staple of bread which was the main food. Referring to God’s people.

“Slept,” meaning God is in control, but we still have a responsibility to be diligent and do all we can to prevent and stop false doctrines and dysfunctions in His Church (2 Peter 2; I John 4:1-6). We cannot afford to go to sleep at the help of His precious Church and allow the enemy to come in. Too many churches have done this, in fact, I would say most have!

“Good seed,” refers to the Christians who have taken His Word with trust and obedience who are the on good ground and yielding. Literally as seed means seed that only had wheat seeds and all of the other seeds were removed. It was more expensive, but required less labor.

What is the set up point? Our worth is immeasurable when we are in Christ (John 12:23-26). Just think, Jesus is telling this to slaves and peasants under occupation from one the greatest and most brutal powers in history, Rome. And tells them His Kingdome is greater! What a great picture of His comfort!