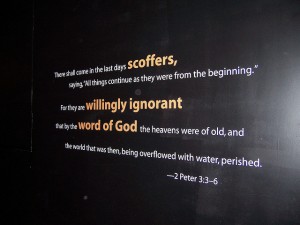 Do you realize that most arguments about end times come from our faulty thinking and conniving agendas pitted against others faulty logic, and lack of good biblical exegesis causing us to forget God’s promises and even His past provisions?

Peter in 2 Peter, is restating his purpose by reminding them of some essential precepts of our Lord, he stated in his last letter. He was writing about some of the same root problems, namely, those of forgetting Christ’s power and impact. So, he shows them from God’s Word. He has apostolic authority and is a principle church leader with the job of giving them instructions.

The problem is that the depraved human mind still will refuse to listen, no matter by what means or authority the message is relayed.

This is what most people get wrong, the meaning of “Last days” or last times, for the first century Jew and Greek, it means the “Christian era.” This will be a surprise to many, because It does not necessarily refer that the actual, final days of our existence, as in the second coming, are around the corner. Keep in mind also it has been nearly two thousand years; thus, not a few days. Rather, it means the period from the resurrection to His second coming. In other words, the present time or what many call the “church age.” Many have mistaken this term to mean that Jesus is right around the corner. Maybe He is, but for countless generations who have said that, well, they have been wrong and have missed the primary point, there will be a judgment(Acts 2:17; Heb. 1:2)!

Peter even points out to us the term “Scoffers,” people who ridicule and make fun of what you do not comprehend or understand. Such as how the early Christians were treated by friends and family and many of us face today. Peter points us to that this behavior only makes the person who scoffs the fool. As at this time, the Gnostics did not believe in the idea of a judgment because they did not believe in moral accountability, so they scoffed. And if you hold to the true Truth today, people will scoff, even fellow Christians who are deluded by seeking one’s feelings to be fulfilled and not God’s Word.

Key word to know: “Evil desires.” Not being rooted in good thinking will create evil stemming from a lack of accountability or a basis for a morality to be built upon.

Here in Peter’s day, the false teachers were ridiculing the idea that Christ would return, since He had not yet. In the same way many Christians ridicule one another over the others view, when the irony is they are both wrong. Also, in Jewish tradition at the time, to ridicule a righteous person was considered evil. They also argued that God neither cares for us, nor intervenes in our lives and we should not trust in Him. Just because something has not happened does not mean it will not happen. Many lives, businesses, and opportunities have been destroyed by this feeble way of thinking.

Yes, Christ will return! We just do not know when. So, let’s stop the argumentation with one another and look to His Word, so we are not the ones who are willingly ignorant. So we can be fruitful with His Word and to one another. We can’t do much with the secular scoffers; other than live the life with fruitfulness the best we can and be the example of His love (2 Cor. 5:20).