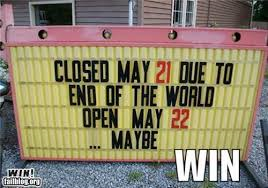 Are you rapture ready? Is that really important?

How important is the “Second Coming” to you concerning how you live your life?

If so, take a look to the Book, as God does not care, in fact He is disappointed. Because He wants us Fruit ready! Think not? Read Galations chapter five and Ephesians chapter four. What does God want of us? A well laid out end times theory or a fruitful life?

Take a look at 2 Peter 3: 1-9, where God Promises Christ’s Return to us! The key word tells all, “Coming… He promised/promise of His coming. Peter is calling us to think back to what the Lord has done for us, so we don’t forget His grace, His provisions, and His answered prayers and blessings. To focus on the here and now what Christ is doing in and take hope He is coming, so we are not to be overcome with the struggles of the moment, so we do not see how He has brought us through them in the past. We are to refresh our memory in Him.

During this time, some people in the Early Church thought Jesus was coming right back right then, which was nearly two thousand years ago, and this was taught that as fact, as many do today missing the point. And, the false teachers used their impatience and misunderstandings of what Jesus taught against them too. Thus, the false teachers were spreading gossip as they mocked them and the ‘regular’ teachers were getting it wrong. Ironically, scoffing is one of the evidences that we are in the last days. We must be careful that what we believe and teach is authentic, or others will use our own words against us and perhaps be just in doing so.

We have to remember this: God does not take sides in a congregation where one side wants a beige covered hymnbook and the other side wants one with a blue cover, as God does not care if we have carpet or tile in the narthex.. He wants us to worship Him as LORD. In the same way, if someone is Pre Mill and others are Post Mill or Am Mill, or Pre Trib or Post Trib, or some are passionate about a rapture while others do not see that in Scripture. It is just not important. What is? That our fruitfulness now and that He is coming back, this is what it is all about.

Arguing about the delivery device is like getting excited about the hot dogs at a ball game, then quarrel what mustard, brown or yellow, you want on it, then not realizing you are missing the world series.

God does not take sides; He grieves when we engage in hostile actions against one another. Ephesians 4:1-6 clearly states what God wants; what He does not want is our feeble wars with one another. We must center ourselves on God’s desires and not our own!

The Christian must not be the type of person who has to have things his or her way all the time. As Christians, we must be in submission to the authority of Christ. Keep the main thing the main thing and not place our faith and worry in the trivialities.

When we are so, the natural inclination to be driven by our self-fulfilling ideas will fall off. The constant prowling to get what we want-when we want it-disintegrates the call because the result of this attitude is a reckless rudeness to others that destroys relationships and inhibits the spread of the Gospel. God calls us out of disintegration and into reconciliation.

First is the Premillennialists view which says that the Second Coming of our Lord will take place before the millennium in which Jesus will literally reign on earth for a thousand years (Rev. 19:11-21).

People with this view usually subscribe to the Futurist view. Satan will be bound and we will live in harmony and peace with one another here on a new earth. Christians will receive new bodies and those who died will be re-birthed also in new bodies. Most believe Satan gets out of his prison for a short time, leads a rebellion, and then there will be a final judgment at the end of the Millennium. Justin Martyr and Papias held this view, as the Early Church was mostly premillennial in its thinking for the first three centuries of the church.

They considered Jesus’ return to be imminent.

Second is the Futurist view, and asserts that Revelation is about the details and order of future events immediately preceding the Second Coming. This view was held by some of the second and third century Church Fathers (although this is disputed), and is popular amongst most Evangelicals today.

This view asserts that none of the events in 70 AD or what Jesus describes in Matthew 24 had occurred or had any bearing on the prophecies of the Apocalypse or the tribulations that mark the period just prior to Jesus’ Second Coming. The seals, trumpets, beasts, and Antichrist are still to come and will appear in the last days of human history. Then, Christ will come back to reign and judge, and establish a millennial kingdom. Thus, most of Revelation is yet to be fulfilled, and its only value is for the Christians living in that age to come, making it irrelevant to numerous generations.

The problem with this view is that the destruction of Jerusalem was the most significant event for the Jew and Early Church, and must not be disregarded too lightly. Also this view relies heavily upon the view that Israel and the church are distinct in God’s plan which is very debatable as Christ’s is for all Greek and Jew alike (Rom. 9-11; 1 Cor. 10:32). Obviously the first 5 chapters are current history in John’s time and the genre indicates that chapters 6 through 22 are in a future tense and view (Jer. 30:7; Dan. 9:24-27; John in 6-18; 1 Thes. 4:16; Rev 3:10).

This book of Scripture is called “apocalyptic” writing, and it is a form of prophecy. Apocalyptic writing is a type of literature that warns us of future events but in which the full meaning is hidden to us for the time being. Apocalyptic writing is almost a secret, giving us glimpses through the use of symbols and imagery of what is to come. We may not know the meanings now, but time will reveal it.

The key to unlocking these imageries is seeking what they meant back then, to the early church, to the first century Jew and Christian and how the churches in Asia Minor would have understood them, not what they mean in a current newspaper, 2000 years removed, which also removes any cultural or language understandings.

Apocalyptic writing is found in Isaiah, Daniel, Ezekiel, Zechariah, and Matthew as well as in Revelation. Prophecy, as literature and meaning for us today, contains past, present, and future events. Examples include the many prophecies concerning Jesus that already have been fulfilled, and parts of Daniel and Revelation, as well as Matthew 24 that will yet come to pass. Prophecy does not always follow a clear logical and systematic pattern, often jumping from thought to idea to another point and so forth. It also may jump over large periods of time. Thus, in Prophecy, we need to be aware of two essential forms of language.

First there is the Literal (Didactic). This is the simple and direct meaning, or in other words, what it says is what it means. It has a plain meaning. Zechariah, chapter seven is a good example, as are much of Isaiah and Jeremiah. The imagery had a clear meaning to the people to whom it was first presented, so don’t jump to conclusions or read in what is not there. If you get frustrated with it, put it aside. Most Bible scholars debate the meaning, so it is improbable that you will have a clear insight. Some people are not ready or able to comprehend this part of the Bible; if so, that is OK! Focus on the parts of Revelation that are crystal clear.

The second form of language is the Figurative (Predictive). This is the category into which most of prophecy and thus Revelation falls. We are to always view prophesy with the attitude that it has a plain meaning until we have clear and compelling reasons to place it in the figurative category.

Our task is to determine the points and ideas that apply today and point to tomorrow.

The bottom line is that it will happen at some point in history, and come to pass in a literal and plain way. We may not understand it until it is right on top of us. Daniel 7-12; Joel 2; Isaiah 11; and Zech. 4 are clear examples of figurative language. Furthermore, some of the language in Revelation is “word pictures” that John is trying to describe in their language and culture as well as technology, such as Daniel, chapter seven, and many parts of Revelation. For example, if he was describing events we might see in our lifetime, how would he describe a helicopter if he had never heard of or seen one? For most parts of Revelation, John was using imagery from Ezekiel, Daniel, and other Jewish literature that they would have known. Unfortunately, today few of some so called Bible scholars who write the popular books are even aware that there is an Old Testament, let alone how to inductively read it.

The key to the understanding of Revelation is in the Old Testament!

Apocalyptic writing can also be cryptic and symbolic such as the fish which was a secret greeting to see if another person was a Christian, too. When we come to words that seem peculiar to our modern minds such as stars, the first-century Jews would know that it meant “angels.” Lampstands meant “churches;” the phrase, wife of the Lamb meant “Jerusalem,” and the great prostitute was a covert slogan to refer to “Nero” or any corrupt leader in power. Babylon was referring to Rome (Rev. 1:20; 17:1-5, 18; 21:9-10). Consequently, the inscription key is understanding the Old Testament and Jewish customs and thought, not today’s newspaper headlines!

It is important to note that 28% of the Old Testament is prophecy, most of which came to pass in the life and work of our Lord Jesus Christ. The New Testament has over 20% prophecy too, of which most (although this is debated) have not yet come to pass. Thus, prophecy is important because God has dedicated a significant portion of His Word to it.

Again, do not read in what is not there!